Hi Everyone, I hope we are all staying safe and well where ever you are in the world. Here in the UK the new normal is changing every day which is making life very difficult to plan with any certainty. I have adopted the philosophy of hoping and planning for the best but expecting the worst in order to avoid being disappointed if things don't happen; luckily the downside so far is that plans are rolling forward rather than disappearing completely. It could be far, far worse…

A bit of a cryptic title for this blog, I have given up trying to plan these blogs too far ahead as my list of topics to write about always seems to change from one week to the next, this post is no exception.

A bit of an odd one and certainly not something that was planned. I mentioned in a recent blog post that I had bought some oil paints and planned to experiment. I had mentioned this to my parents and this sparked a conversation relating to one of my Dad's work colleagues. My father has been retired for many years now but while he worked he formed a close friendship with a work colleague whose father had been a pastel artist. This friend had inherited his father's artist materials on his passing but, not being an artist himself and with no younger family of his own, they had remained untouched for many years.

When my nephews were younger, one had shown some artistic interest (and talent!) which sadly was never developed but it was enough for my father to mention this in general conversation with his friend. This resulted in my father being gifted these artists' materials from his colleague. My nephew had moved on at that point so my father consigned this box of tricks to the loft for another day. My mention of oil paints sparked a memory and my Dad rooted out the box and gave it to me. What an absolute treasure trove!  A lovely box full of goodies which had been looked after so carefully and, despite the box and it's contents being around 50 years old, were still in perfectly good order. Here are some pictures of what I found when I opened the lid. 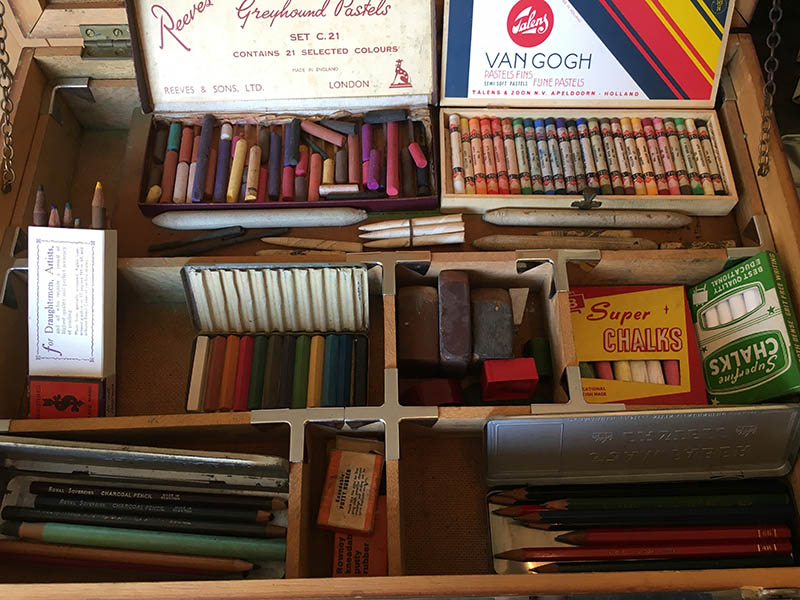 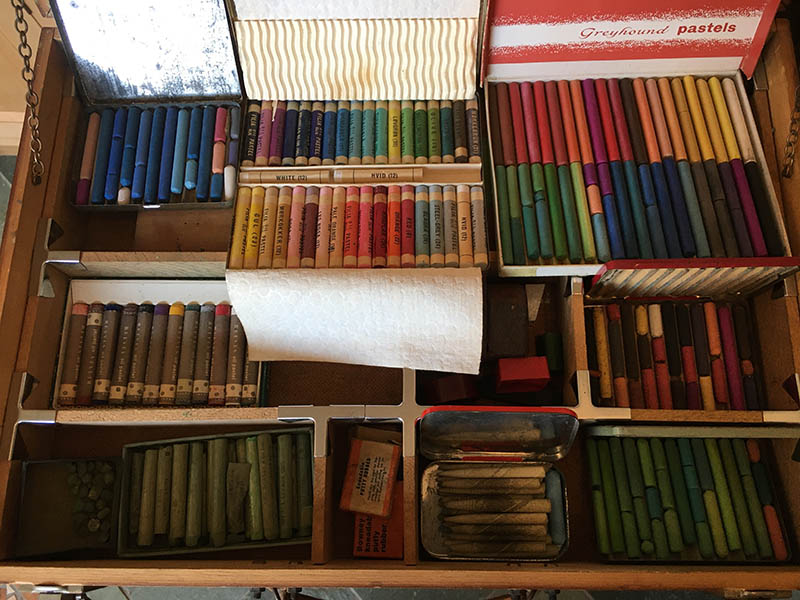 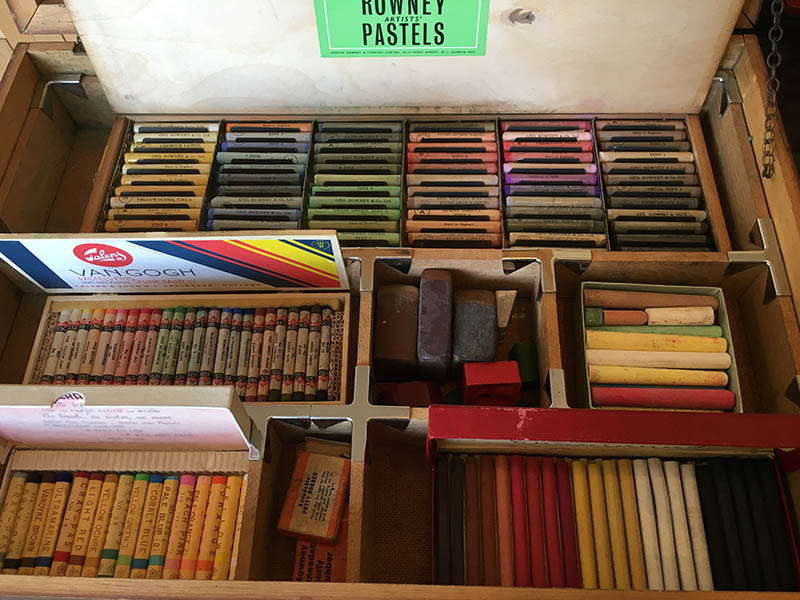 I will be honest, I had never really heard of 'pastels' prior to this but that's what YouTube is for right?  This has taken me off on a tangent trying to think of ways to incorporate these pastels into my photographic process somehow.

So, where am I in terms of this particular project?  I have worked out a way to make a photographic print and then apply a layer of primer which adds 'grit' to the image. This allows the pastel to stay on the paper. Without primer the pastel just falls off the paper regardless of how textured the paper actually is. The print does need to be adjusted so that the application of pastels makes a difference. For example, a blue pastel applied onto a blue print is not that exciting; that same blue pastel applied onto a yellow print is much more exciting as some of the underlying paper will always be visible so the yellow will create some depth and contrast. It took me a while to work this out but once the penny dropped it's easy to rotate the colour wheel in Photoshop in readiness for pastels to be applied.

I decided to start with a fairly simple image so I chose one of my blue Meadow Flowers to play with. Here is the original image, the image adjusted for pastels to be applied and my Work-In-Progress. 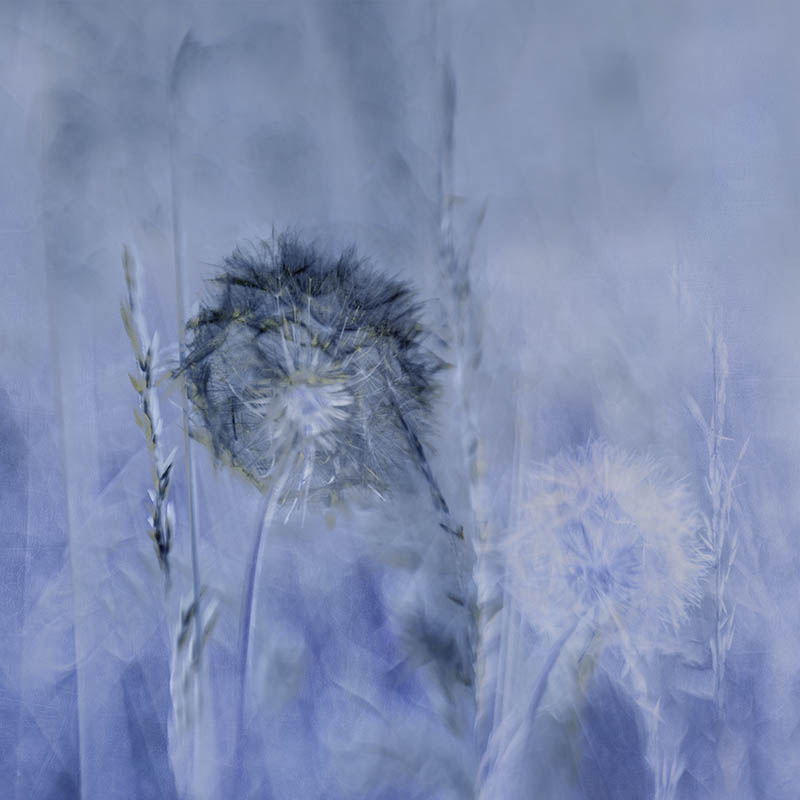 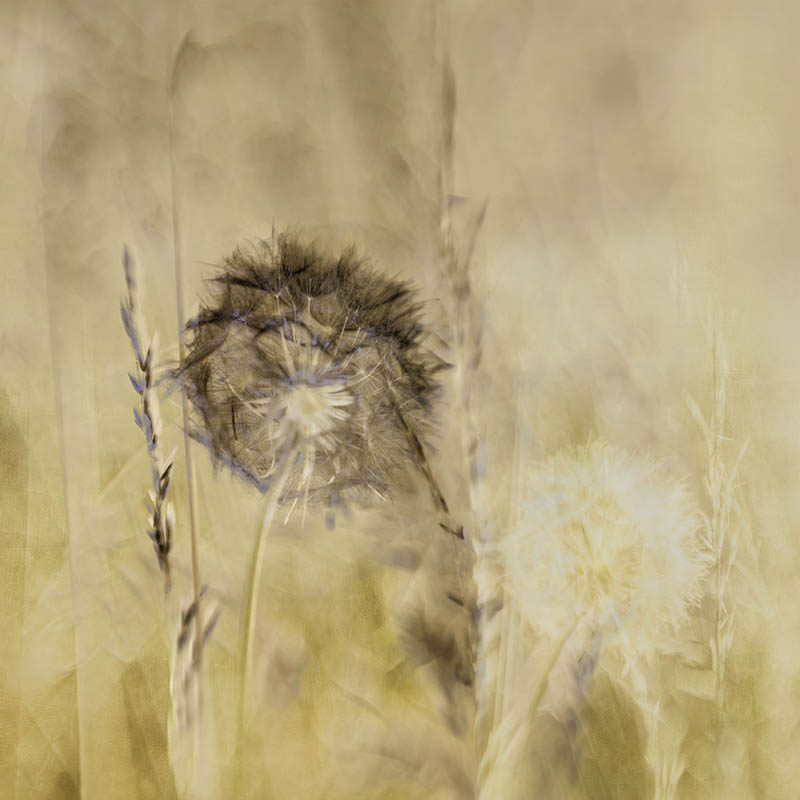 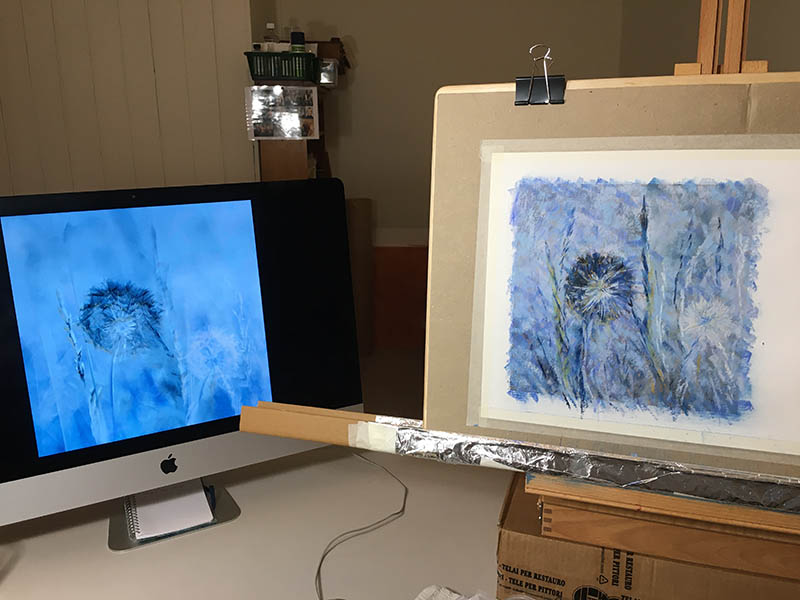 ...and the final (although the temptation to continue to fiddle is overwhelming!) piece of work... 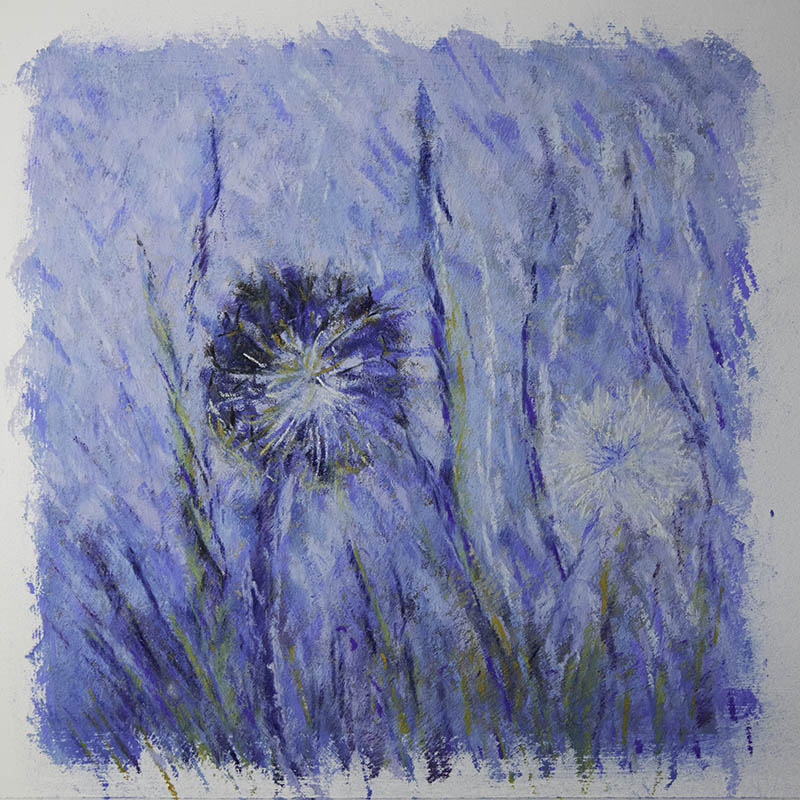 In terms of a learning exercise, this process was invaluable. It did however feel a bit like 'painting by numbers' so my next challenge is to find a way to use pastels as part of the the photographic process in a way that allows the underlying photograph and the pastels to co-exist within the final print. By changing the colours in the way that I have in the above, I need to apply pastels to the whole image, it doesn't allow me to apply them to just part of the image. This means that I need to either pre-plan the final image and to colour-shift (and prime!) only those areas I want to apply pastels, or to drift towards a more monochromatic image and use pastels selectively to add colour...  I feel hours of exploring ahead!!

I mentioned in a previous blog post (here) that I was experimenting with having some images printed onto Metal. Well I went ahead and had an image printed 80cm Square which I have now hung up in my little courtyard.

DIY is not really my 'thing' so it took me a while to hang it up but that was mostly measuring and working out where I needed to drill holes (then finding ladders etc...). Anyway, it has been up for a couple of weeks now and has survived a couple of minor storms and lots of rain! So far, it looks the same as it did when it arrived. I will be keeping a close watch but have already started looking at my outdoor walls to see if I can squeeze in any more prints. This was an easy space to fill as it is shaded all year round so not great to grow things against but that made it perfect for a splash of colour. 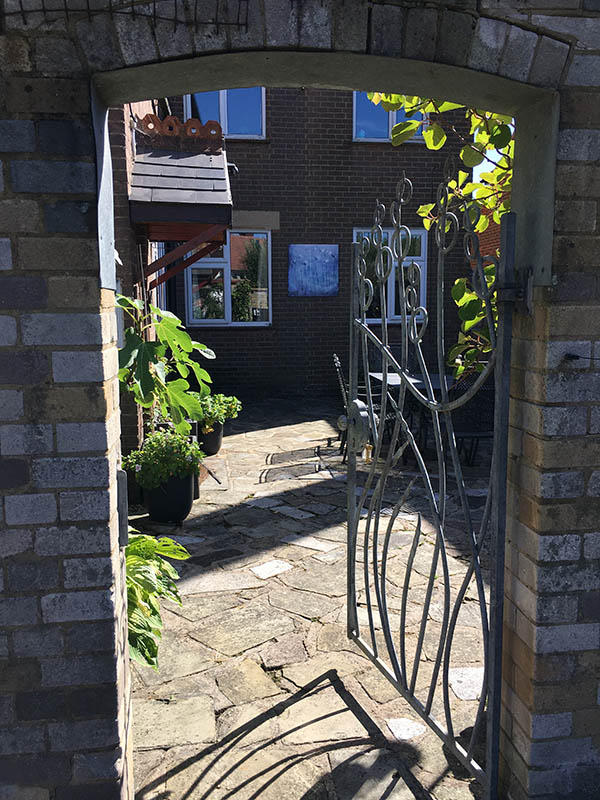 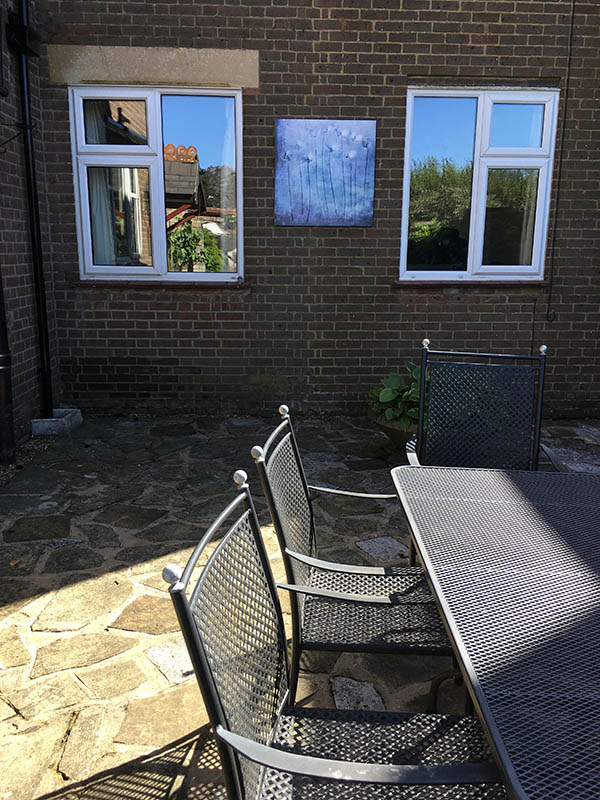 A good few years ago before work (and work travel!) dominated my life I used to give talks to Camera Clubs and other similar organisations. My talk was all print-based and I used to fill the boot of my car with print boxes and any 'stuff' that I thought would be interesting at the time. I loved (and still love) working with printed materials as I really do think that a print can add a whole new dimension to an image so I didn't mind all the fetching and carrying before and after a talk.

Now that I my work life is largely behind me (hopefully!) and I have been able to pick up the photography-baton again I have been asked to give a couple of photography talks to clubs again which is great honour. I have 2 in the coming week and one in January. Given the current climate coupled with the fact that my photographic work has definitely moved on in the last few years my content will be new, digital and delivered via Zoom. I am really enjoying pulling together the content from scratch and thinking about how I will talk about my work, it is taking ages but this initial investment of time will hopefully set me up with a structure and framework that I can continue to develop and evolve moving forward.

Here are a few screenshots from the talk as it currently stands... 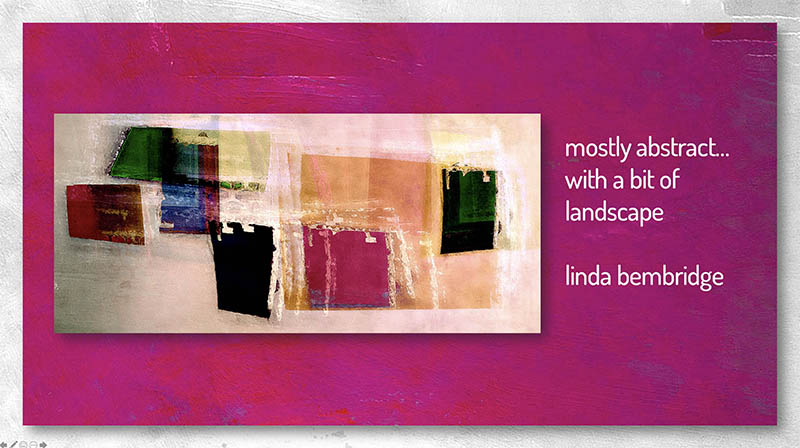 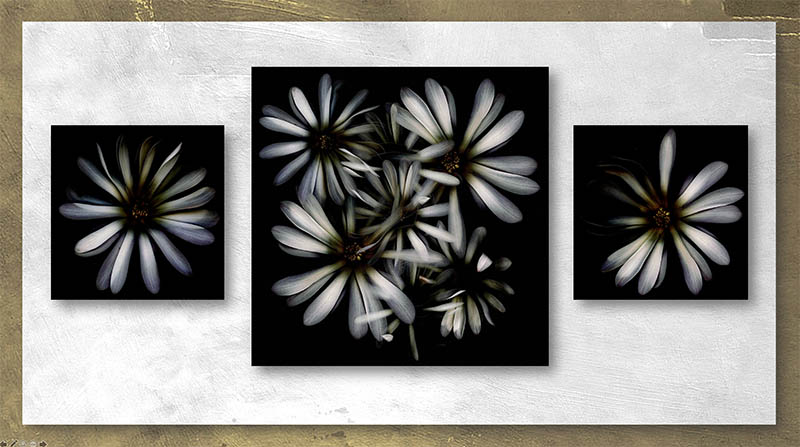 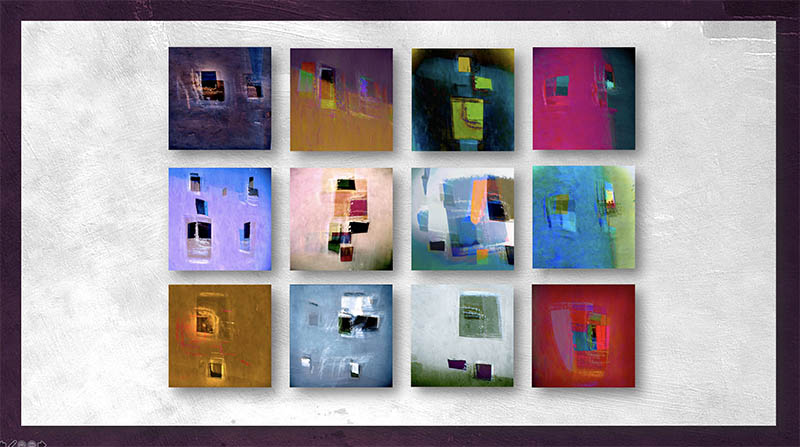 If you think you might know an organisation that might be interested then please get in touch and we can see if can move forward; delivering via Zoom (or similar) opens up so many new possibilities so who knows!

Anyway, I never think I will have much to write about but I seem to have rambled on again for quite a while. I feel this is a 'Butterfly in the Comments Box' moment again as I don't expect many of you will make it to this point...  If you did - well done!!   Please leave a comment if you've enjoyed this post, I always read and reply to everyone so let me know what you think.